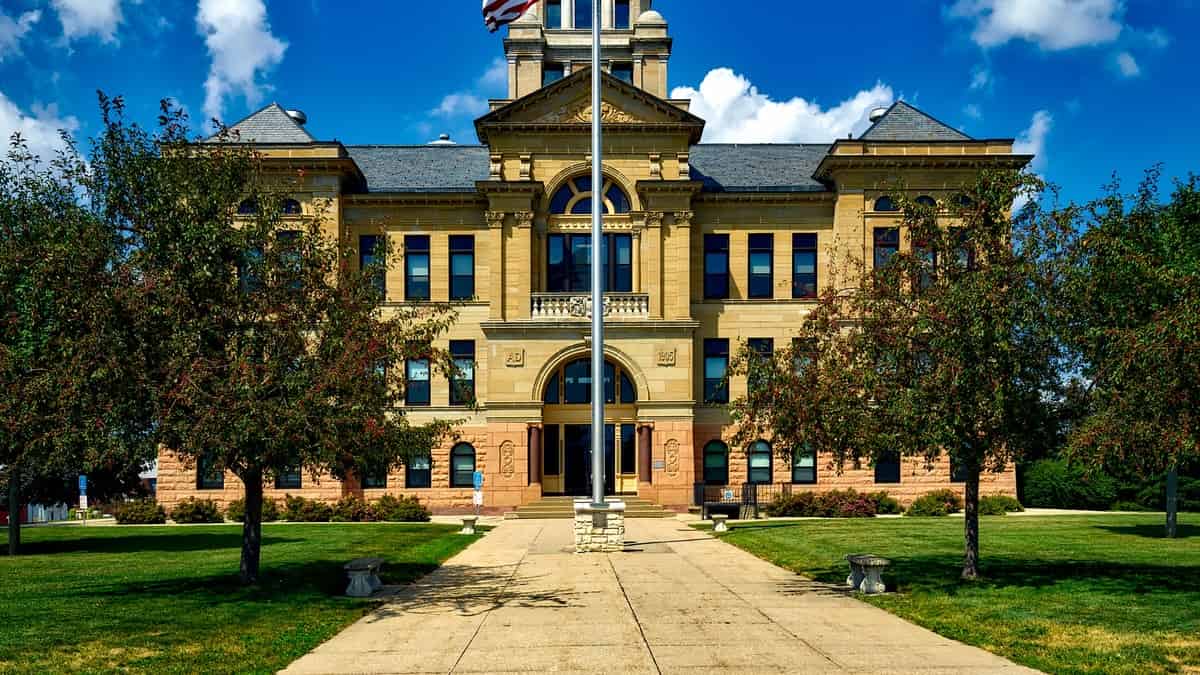 The county seat moved from Belle Plain to Baird in 1883, and a courthouse, designed by noted architect F.E. Ruffini, was built at this site. The county hired another noted architect, J. Riely Gordon, in 1900 for a larger courthouse; J.E. Flanders was the supervising architect. In 1928, the growing county hired Voelcker & Dixon Architects & Engineers of Wichita Falls, who designed this Classical Revival courthouse, completed the next year. Suggs and Dunlap contractors constructed the building, which features intricate detailing, including acanthus leaves, rosettes, medallions and cartouches. Recorded Texas Historic Landmark - 2003.

Callahan County . In 1884, F. E. Ruffini received a duplicate set of plans for the Tom Green County Courthouse from his brother, Oscar, who had been hired as superintendent of construction for the new courthouse in San Angelo. F. E. was so taken with the design by W. W. Larmour, that he adapted the form to create his plans for the Blanco County Courthouse in Blanco. The design proved so successful, Ruffini quickly presented the plans to two other counties: Callahan and Concho. Eventually the same plan would be used to construct a total of five courthouses in the state including Sutton and Mills Counties. Of the five courthouses constructed using the design, three survive: Blanco, Concho, and Sutton Counties'. The Second Empire styled courthouse was laid out on the traditional cross axial plan with wide corridors dividing the ground floor into four equal quadrants. Offices and storage spaces located in these quadrants were allocated to the County and District Clerks, Sheriff, County Treasurer, Tax Assessor, Surveyor, County Judge and chambers for the Commissioners' Court. Stairways at either side of the east-west hall rose simply to a graceful curve at the top. The second floor was occupied by an imposingly scaled courtroom and several jury rooms. On the exterior of the two-story stone structure, the walls were constructed with cream-colored ashlar masonry with cut stone quoins and a cut stone string course which separated the two floors and formed a base for the tall narrow window openings. A wide metal cornice was carried on ornamental brackets. Above the cornice rested the mansard roof rising in three sections and featuring framed circular dormers and metal trim which contrasted with the cornice. Mansard pavilions with wrought iron cresting accented the entry bays. At each elevation the entrances were further emphasized by a triangular pediment. The north and south entries were flanked by projecting bays with cornices slightly higher than the adjacent wall surfaces.  In 1900, the Courthouse razed and the materials used for a new courthouse.

Callahan County Courthouse 1900 - Constructed primarily from materials of the previous courthouse. Construction was supervised by architect J. E. Flanders. 'Ordered by the Court that the J. Riely Gordon Co. Architects of Dallas be and are hereby employed as architects to prepare suitable drawings and specifications for a new courthouse for Callahan County approximately 65 x 75 feet two stories high and to utilize as much of the materials, etc. now contained in the old courthouse as is suitable. The remainder to be property of the contractor, who shall remove such stone and debris as is not needed for filling and grading the lot. It is further ordered by the court that the plans and specifications are to be submitted to this court, and accepted by this court before any advertisement for bids are to be made on same. It is further ordered and understood between Callahan County acting through her Commissioners Court, and the J. Riely Gordon Co. Architects, that said Callahan County does not become to said J. Riely Gordon Co. Architects, for any fees or compensation of any character until a contract is let and bond fixed to build said courthouse.' Commissioners Court Minutes Vol. C, page 425.The court agreed to spend $27,069 for the building.  Electric lights were installed in 1906.

Callahan County Courthouse 1929 - Built in 1929 by Voelcker & Dixon, in Classical Revival style sometimes referred to as "Texas Renaissance."  In 1961, structural repairs to the basement. Reconstruction of the roof with steel and concrete. 1962: Otis elevator installed. 1970: Second floor remodeled.